TEXAS FAITH 77: Could an atheist be elected president?

The Public Religion Research Institute has released a survey examining the state of faith and politics. Some stories seized on how only 42% of Americans know Mitt Romney is a Mormon and how most Americans want to see a redistribution of wealth. Americans are divided about a lot of things, but the survey did point to one area of considerable consensus. Americans want their president to believe in God.

What does this survey say about us? Do we believe that a religious person would be better handling health care, commanding the military or advocating tax policy? Or are we more comfortable thinking that somebody who believes in a higher power is in the White House? Do you have to believe in God to protect Medicare? Must a president hold values that come from religion?

Could an atheist be elected president? And perhaps more to the point: Is it reasonable to hold that a president who believes in God would do a better job than one who does not?

However, those who have some understanding of God definitely have an advantage.  Those who understand the soul, the self, know how to do benefit for the self.  As the self is different from the body, it also has its own needs and necessities.  Such needs and necessities are more important than the desires of body.  For example, if you were a witness of a car wreck and instead of helping the persons in the wreck, you first begin to help repair the car.  I would have to say that you are a fool.

Similarly many leading officials foolishly make plans bring about more comforts but do not know what will really bring about a happier state of life.

Harinam Sankirtan At Whole Foods in Lakewood on July 4th 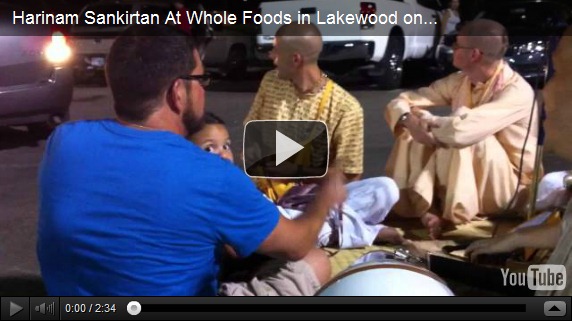 Every year thousands upon thousands gather in Lakewood in Dallas near Whole Foods to watch the fireworks for the 4th of July. We went down there with a small kirtan crew, which everyone appreciated.  Many families started to join us and participated in dancing as well

Posted by Unknown at 1:37 PM No comments:

Earlier this year I was cordially invited by the secretary of the Mayor of Dallas, Mike Rawlings, to perform the invocation for the Dallas City Council Briefings.  I originally met Amanda Sanchez, his secretary several years ago at the temple.  She had come with a group of students for a school project to attend a temple tour and interview.  This video will be the third invocation that I have done for the Dallas City Council.

The Sadhu Sanga Retreat was really a treat for the heart. His Holiness Jayadvaita Swami started off the event on the first morning by giving us a clear understanding of what the word sanga is all about. It is association, but not superficial association. It is just like a scientist's convention where they gather together and share their realizations, devotees similarly gather to hear and chant about Krishna, that is sanga, association.

The retreat was set in the beautiful town of Wimberley, Texas which is situated at the confluence of Cypress Creek and the Blanco River. The crystal clear creeks and numerous swimming holes make it one of the 10 ten best small town vacations spots in America. I had taken some videos where you can see the amazing tree house and the waterfall bridge as well.

The festival consisted of morning program with class, kirtan, kirtan, and more kirtan. It was an opportunity for all devotees to simply focus on Radha and Krishna's Holy Names without distraction. For my family and I this was our LA Ratha Yatra, our New York Ratha Yatra, and so on. Because now, with having kids, it is not possible for us to travel to see all these festivals. At the Sadhu Sanga Festival were the best kirtaniyas in the world and the beautiful kirtans went on all day long. I took a short video clip that you can see of His Holiness Giriraj Swami dancing blissfully to His Holiness Indradyumna Swami's kirtan. 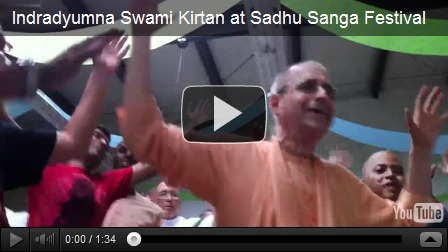 Another special treat for me was being able to see a small initiation ceremony, ( which I also video taped) of a very old friend of mine. His Holiness Indradyumna Swami promised him a name that everyone could remember, Sadhu-Sanga dasa

TEXAS FAITH 76: Is it good or bad that God and religion have gone missing in the presidential race?

A funny thing happened in the presidential race. God has left the stage. Neither Barack Obama nor Mitt Romney is putting religious faith in the spotlight – certainly not like earlier in the GOP primary when Rick Santorum, Rick Perry and Newt Gingrich routinely invoked God and faith in framing their political views. George W.  Bush was among our most religiously expressive presidents. And four years ago, Barack Obama very publicly hired a religious-affairs director on his campaign team and, angering some liberals, promised he would keep predecessor Bush’s faith-based initiatives intact if elected president. Nothing like that is happening now. Georgetown University professor Jacques Berlinerblau says “faith and values politicking” is nearly invisible in this year’s general election.

“Ah 2008! Good times for Faith and Values politicking, be it red or blue. It seemed every candidate – from Mike Huckabee to John Edwards – was invoking God on the stump and seasoning his or her rhetoric with scriptural allusions. Yet now that we have entered the 2012 general election  F and V campaigning is at its lowest ebb since the 1996 presidential campaign,” Berlinerblau wrote recently in the Chronicle of Higher Education.

There are reasons: Romney’s Mormon faith is something that some in the GOP base are uncomfortable with. As for Obama, says Berlinerblau, “no bone-crushing, rain-making, coalition of religious progressives has emerged to support him.” The most active religion-talk this election is not coming from the candidates but the clergy – specifically, Catholic bishops on the issue of contraception. As the cable-news pundits remind daily, this election is about the economy. And so Faith and Values politicking isn’t front and center this year. Is that good or bad?

Is our electoral process better off without the polarizing issues of faith-based politics at center stage? Or does the absence of explicit moral and religious expression impoverish our political debate? Our Texas Faith panel weighs in: Material energy is characterized by the quality of atrophy, and opposite to that is the spiritual energy, which is ever existent.  For example, the body is always changing – the cells that were in our body at birth are no longer in the body at 18, for the body has changed.  Despite the natural reincarnation that takes place in the body during this very life, the owner of the body is still the same individual.  That person, being made of spiritual energy is ever existent, despite the changes of the body.

Not only is the material energy subject to constant aging but even the discussions in regards to the material energy are always doomed to become stale.  Another example: Say you watch the latest popular movie and tell your friends about it.  In the beginning there may be some flavor to the discussion but eventually such a discussion becomes old and stale.  But on the other side, if someone has some significant knowledge of God and spiritual topics, such a discussion does not have an expiration date, but rather becomes more interesting and revealing as time goes on.

Therefore because the leaders are not sufficiently experienced in higher matters of the self they are then forced to speak about the same old stale topics, topics that are simply the symptoms of a greater spiritual problem.

On the fourth of July Darsie and I needed to go to home depot to buy stuff for her new apartment and dirt to transplant my Tulasis .
Before we left I told Darsie “We should bring some books since we are both wearing devotional clothing and tilak, someone might ask us a question."  Even if no one asked we were going to stop someone and try to distribute a book.  We were not going to come back home till we gave a book to someone.
Without fail every time I wear a sari and tilak out other than the temple and harinam someone always approaches me and asks what is my religion, where am I from, or where to buy a sari.  On July fourth it was not any different and just as expected as we were in the parking lot loading the car, a gentleman named Oscar approach us and asked us "Where are you guys from?"  I reply by saying "She is from Texas and I'm from El Salvador"  he reply by saying "Ooohhh I thought you guys were from the middle east because of the clothes"  I told him we were Hare Krishnas and asked if he had heard of yoga before, then then I asked him if he had ever had stress which he reply yes to and I said here take these books with you, they will help you.  He happily received the books and said he was going to have his daughter also read them.
We invited Oscar to the temple and told him about our free vegetarian feast. He inquire about vegetarianism. I told him we also believe in Jesus and take his teachings to heart, and that he wasn't unintelligent, he clearly said "you shalt not kill" and that the word kill includes all life forms not just humans. Oscar reply by saying "Oh Wow so that's what Jesus meant" and he accepted it. He said he believes everything in this planet has a soul.  He even said, "I believe even the trees have souls" I said, “yes that is true.”
He said he felt blessed he met us and that we had been put in his path to received those books that were going to help him.

Posted by Unknown at 8:43 PM No comments:

Book Distribution at the Warped Tour 2012 in Dallas

Brad from The Green (Reggae Band) His yoga teacher told him to read Bhagavad Gita. He had a tattoo in sanskrit and Abhaya, fearless pendant on his necklace. He was from the same island as me and when to the same high school as my mom, Punahou