I had wanted to avoid the May 21st rapture debate because it seemed like so much of a chip shot. Even many who believe in one form or another of end-times theology have disagreed with the prediction of Harold Camping of the Family Radio Network. He's the fellow that predicted Judgment Day was to come Saturday. (As I understand it, Camping, a civil engineer, reached that conclusion by pegging May 21 to being exactly 7,000 years after Noah got caught in a flood.)
But his prediction has generated plenty of attention. And since Judgment Day didn't come, and we all are still here, let's deal with the underlying issue in this discussion. And that is the ongoing prediction of the world's end.
Camping is hardly the one to offer a precise date. The New York Times reports how Seventh-Day Adventist Robert Reidt long ago predicted February 6, 1925 as the day of reckoning. And the Christian Science Monitor last week catalogued five big examples of end-time dates, going back to one in 1844.
Here, then, is this week's question:
What gives rise to precise end-times predictions?

It natural to expect change as we see in this world there are four seasons. Also, a lot of religious literature speak about a change in times.

For example, the Vedas speak of this age, Kali-yuga, and its end times. This end time is explained to be 427,000 years from now. But this event is cyclical, like our four seasons. Not an actual end of this world but rather a change in the spiritual direction of the populous.

Should end times be a motivation for religious renewal? According to the great saint Srila Bhaktivinoda Thakura, religious motivation based on fear is low-grade religion.

Why worry about end times, everyone already has their own end time to worry about. Even though America is technologically advanced, the death rate is still a steady 100%. Bhaktivinoda Thakura teaches that in general there four levels of religious motivation.

1) Bhaya -- out of fear.
2) Asha -- for satisfying material aspirations.
3) Kartavya-buddhi -- out of a sense of duty (literally, "a mentality of what should be done").
4) Rāga -- out of genuine attraction for the Lord.

To see all the responses from the Texas Faith Panel click here
Posted by Unknown at 1:36 PM No comments:

TEXAS FAITH 41: Is science leading to a new literalism?

British theologian and Anglican cleric Keith Ward contends that the growing role of science in the world, where countries depend upon scientists and inventors to drive their economies, has led to a growing literalism.

Or so reports Michelle Boorstein on the Washington Post's On Faith blog. Writes Boorstein;


"Keith Ward, a British philosopher who was for years the canon of Oxford's cathedral, argued that the rise of science has led in the Judeo-Christian world to two things: literalism, because people no longer value things they can't prove, and secularism, because critical thought can tend to shift people to look at the Bible like any other book.."


(For more about Ward's thinking, you can read the lecture he gave in 2009 about science and religion at this link.)


Let's put aside the secularism point and focus on the scientific angle. We certainly live in a world where science and technology are on the rise. Many of us benefit from that reality, whether through advances in health care, being able to say hello to friends and family around the world through new technologies or learning more about the origins of our universe.

But does Ward have a point?
?: Has science, with its emphasis on empiricism, led to a new literalism, where we value things we can prove more than things we cannot?

NITYANANDA CHANDRA DAS, minister of ISKCON (International Society for Krishna Consciousness), Dallas
The attraction to modern science is its practicality. Put some food in the microwave, turn it on, and the food comes out hot. No belief, just practical results. Similarly religion is not supposed to be based on belief but rather its ability to produce practical results. The foremost of which is happiness.
Religion without philosophy is simply sentiment or fanaticism and science and philosophy without religion is simply mental speculation. Real faith is attained with practical results.
Therefore I feel that they problem is that religious groups have moved away from practical experiences of a spiritual connection to the realm of blind faith.

To see all the responses from the Texas Faith Panel click here
Posted by Unknown at 1:20 PM No comments:

Nope, not talking about the tiny but readable Sanskrit Bhagavad Gita that resides in my bead bag pocket

But rather the newly updated Vedabase app which is now available for not only iPhone & iPod,  but now iPhone 4 & iPad with its improved retina display.  Previously known as Pocket Vedabase, Pocket Vedas works great.  There is a night and day font and I have used it for reading in dark for hours quite comfortably while the children are sleeping.

Retaining all the great features of it previous version such as dynamic book marks, which keeps your place in various books, this update includes a lot of other great features.  All the verse only pages are now available, so you can now read the index page that has all the verses for the each chapter.

Also all the hyperlinks now work.  Meaning any verse that is in the purport or in the index can be clicked on to go directly to that page.

The reading format is also improved, a simple tap on the screen (instead of the previous tiny ‘+’) brings up various menus.  On the two bottom corners you have the page turn.   If you click on one of those hyperlinks you can also click on the back and forward buttons to return back to the spot in the previous book that you were reading.

Updated for iOS 4, Pocket Vedas does not only open back to the exact spot you were reading from it also starts up with no boot time once opened.

However the main addition is the ability email booksmarks, verse links from Vedabase.net, and links that open the reader’s own Pocket Vedabase app to the desired verse. 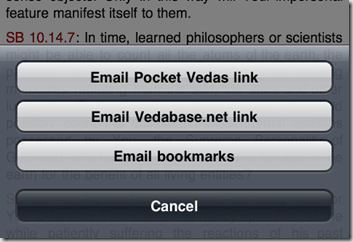 This opens many uses such as updating reading notes to Evernote.  Or updating Facebook or Twitter status with a favorite quote with a link.  There a little work that can be done to improve the emailing.  Currently the links appear as such,

“In time, learned philosophers or scientists might be able to count all the atoms of the earth, the particles of snow, or perhaps even the shining molecules radiating from the sun, the stars and other luminaries. But among these learned men, who could possibly count the unlimited transcendental qualities possessed by You, the Supreme Personality of Godhead, who have descended onto the surface of the earth for the benefit of all living entities?”

This does not allow editing of the link.   Just a Translation with with link embedded.  I have left a suggestion in a correspondence to just include the raw link, such as http://vedabase.net/sb/10/14/7 which allows the user to decide what text they want to post and also allows the link to work when updated in FB and Twitter via email. I hope to see this updated in the near future.

All in all I am very happy with the update.

PS.   For those who are updating, if you cannot see the hyperlinks and index pages when first updating app there is a simple and one time fix.  Go to the settings make any adjustment and apply and now it will work fine.  You can go back to your original settings again and it will still work, just a one time adjustment.
for more info see Dancing Ganesh
Posted by Unknown at 8:13 PM 2 comments: