TEXAS FAITH 61: Should the ban on political activity by churches be repealed?

It's a presidential election season, so count the issue of church involvement in politics to come up this year. Federal tax law is quite clear. Houses of worship cannot formally endorse or oppose candidates for public office. They can speak out on issues. They can conduct non-partisan voter registration drives. Ministers can encourage those in the pews to stay informed on the issue important to them. But a religious leader cannot endorse a political candidate from the pulpit. It's a tax issue. Churches, synagogues, mosques and places of religious worship with tax-exempt status can't actively engage in partisan politics.
It hasn't always been that way. In 1954, federal law was changed to say that charitable organizations lose their tax-exempt status if they engage in political campaigns. The rule might be constitutional (one Supreme Court said it was). But why is it a good idea? Why is it ever a good idea for government to restrict what ministers can say in a house of worship?

Are we better off with the current situation in which some groups skirt the edge of the law, creating separate entities or disguising clear engagement to the benefit of a particular candidate with a creative explanation about how they aren't doing that at all? Is it better that religious leaders self-censor what they tell their congregations for fear of audits and fines? Without the rule, presumably there would be conservative churches that tilt toward Republican candidates and progressive congregations that that would favor Democrats -- and a lot of pastors who don't endorse because they don't want to. But shouldn't that be their call?

Should the federal ban on political activity by churches and religious institutions be repealed - or remain in place?

Our Texas Faith panel weighs in -- and they don't agree on the answer.

I see this as an obstruction of the freedom of speech. The definitive lines are quite faded. Are those who are ordained as ministers to be silenced when approached with questions regarding a potential leader's policies? How far does the pew extend? It is only during the official mass ceremony that the priest should edit his speech, or how about in the office? Or over dinner with friends? Some ministries only happen at home, do such casual encounters come under scrutiny as illegal activity?

I believe the call for freedom of religion was established for the sole purpose of freedom rather than intolerance. Therefore separation of church and state was established, so that the state would not be intolerant of other faiths. However one should not blindly concede that religion has absolutely no place in politics. The moral policies of even the most staunch atheist are often based in religious sentiments and so far I have not seen a strong logical presentation of secular morality. It all comes back to religiously based morals. Therefore I feel an artificial separation by the process of disallowing religious dialogue on practical matters is factually an endorsement of the modern religion, atheism.

To see all responses of the TEXAS Faith panel click here.
Posted by Unknown at 12:32 PM No comments:

TEXAS FAITH 60: Is the world getting better?

Centre College professor Beau Weston operates an interesting blog, the Gruntled Center. He put up a post last week that draws from a lecture he recently gave at his Kentucky college. In the post and lecture, Weston, a Presbyterian, makes the argument that the world has gotten better.
He notes how violence is down in most "competent" nations, authoritarianism is in retreat worldwide, various forms of discrimination have diminished, food production is growing exponentially, air quality has improved, the population bomb has been a dud and transportation costs are cheaper. He lists a number of other indices, which you can read about on this link.
So, here is the question for the week:


Is the world getting better?

We certainly read a lot in, yes, newspapers about things going awry. Republican candidates making the case against Barack Obama offer ample examples of the world being a mess. And many a book has been sold about the next coming crisis.
But are we looking at all this the wrong way. Is it indeed the case that the world is getting better?

In the ancient Vedas our modern time period is called Kali Yuga, or the Age of Quarrel. The predictions, which come from 5,000 years ago, are as follows:

"Religion, truthfulness, cleanliness, tolerance, mercy, duration of life, physical strength and memory will all diminish day by day because of the powerful influence of the age of Kali. In Kali-yuga, wealth alone will be considered the sign of a man's good birth, proper behavior and fine qualities. And law and justice will be applied only on the basis of one's power. Men and women will live together merely because of superficial attraction, and success in business will depend on deceit. Womanliness and manliness will be judged according to one's expertise in sex, and a man will be known as a priest just by his dress or position. A person's propriety will be seriously questioned if he does not earn a good living. And one who is very clever at juggling words will be considered a learned scholar. A person will be judged unholy if he does not have money, and hypocrisy will be accepted as virtue. Marriage will be arranged simply by verbal agreement, and a person will think he is fit to appear in public if he has merely taken a bath. Beauty will be thought to depend on one's hairstyle....." - Śrīmad-Bhāgavatam 12.2.1-6

Although Kali Yuga is very gradual devolution that extends a period of 427,000 years, one can see even in one's own short duration of life a gradual increase of selfishness and a decrease in pious qualities of society. But it also predicted a positive: "Although Kali-yuga is an ocean of faults, there is still one good quality about this age: Simply by chanting the Hare Kṛṣṇa mahā-mantra, or any name of God, one can become free from material bondage and be promoted to the transcendental kingdom." SB 12.3.51

To make the best use of a bad bargain, one can use the distasteful nature of this material world as an impetus to make spiritual progress. So in one sense this world is better because of this fact and also the chanting of God's names will improve the quality of life. In the other sense, without programs for spiritual elevation our society will continue down its downward spiral of materialism and selfishness.

To see all responses of the TEXAS Faith panel click here.
Posted by Unknown at 1:27 PM No comments:

Logging into Krishna.com I see this tiny thumbnail.

It is for a new album by the great Madhava Das.  However due my material conditioning the thumbnail to me looked like a picture of Darth Vaders’ DeathStar, a silhouette of a Star Destroyer and sadly I even thought that it was Darth himself on the right.  However on closer inspection I see that it is Sri Krishna Himself amidst a beautiful scene.   The album can be found here.  Oh Woe-is-me

Posted by Unknown at 2:51 PM No comments:

Email ThisBlogThis!Share to TwitterShare to FacebookShare to Pinterest
Labels: Humor

Great time distributing books with Mother Gopi Gita and her kids and our family as well.  We did door to door book distribution in the morning.  90% of the people purchased books, it was great.  It is easiest form of book distribution that there is. The little book distributors had to access to free amusement park, a fun slide that the local kids made.  Even little Visakha and Drona got a few rides in. In the afternoon we had a cultural program in the mall with face painting, Bharatnatyam, books and prasadam distribution, and other musical performances.  I showed up in shorts because I thought that I would be teaching children yoga but I ended up just being part of the kirtan. 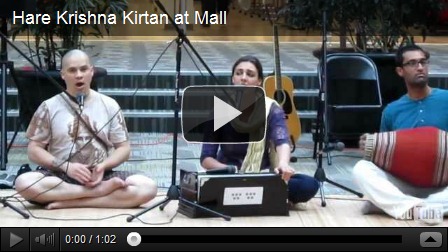 Posted by Unknown at 8:35 PM No comments:

TEXAS FAITH 59: Are humans to serve the Earth? Or is the Earth to serve humans?

This week's question comes from a suggestion by panelist Daniel Kanter and it follows up on remarks that Rick Santorum made recently in speeches and on TV about the environment. Here is an excerpt from Santorum's February 19 appearance on CBS' Face the Nation:
"Man is here ...to care for the Earth, to be a steward of the Earth. But we're not here to serve the Earth. The Earth is not the objective. Man is the objective. And-I think a lot of radical environmentalists have it upside down."

Previously, Santorum made similar comments in Colorado, where he reportedly said:

"We were put on this Earth as creatures of God to have dominion over the Earth, to use it wisely and steward it wisely, but for our benefit not for the Earth's benefit."

Santorum followed up his observations in Colorado with comments about climate change. But I'm not interested in a debate about the pros-and-cons of that subject for this week. Rather, I would like to hear your answer to this philosophical and theological question:

Read on to hear what our panelists think about this issue, which goes to the heart of the religion-and-politics nexus.

Man and the Earth are here to serve God. Man is not meant to be an exploiter of the Earth, nor is man meant to be solely devoted to the Earth.

However, when humans are acting in God Consciousness, Krishna Consciousness, the fruits of their actions are not only free from the effects of harming the Earth but also those fruits create healing and benefit for the planet.

In the Vedas, nature is said to be a servant of God. Nature provides abundantly to a society who follows the natural spiritual laws, and those break them will find themselves deprived of nature's gifts. It is called karma, the planet reciprocates with our pious and impious deeds.

Our very disease that distances us from God is our envy of Him. Our desires to lord over and exploit, our desires to be adored, loved and served above others, desires for fame and prestige, our desires by which we see others as objects of our enjoyment, all pull us away from the happiness of serving truly God.

However, this unnatural desire of the soul cannot satisfy the soul. When the soul works according to his natural desire not only does his heart become pleased but he also becomes a healing gift for the planet.

To see all responses of the TEXAS Faith panel click here.
Posted by Unknown at 10:39 AM No comments: