Is the time that I takes to read the entire Bhagavad-gītā As It Is
with Sanskrit verses, English verses and Srila Prabhupada's Purports.

How do I know this?
Well I have a copy of Dravida Prabhu's audio book of the complete Bhagavad-Gita and if you put it in iTunes it tells you what is the total time for the album.
I can now hear entire Bhagavad Gita while driving, it is quite helpful. If you are looking for a copy see here.
I can't wait till His Holiness Keshava Bharati Maharaja finishes his narration of the entire Brhad Bhagavatamrita with purports, that is going be awesome. Hare Krishna
Your humble servant,
Nityananda Chandra Das

Valentine's Day - the day I became a monk

In 1999 on Valentine's Day I decided to join the temple as a full time brahmacari, a full time monk. So actually Valentine's day is one the most important day of my life.

This years Valentine's Day was also a great blessing. Our temple was blessed with association of His Holiness Indradyumna Swami as well as his famous disciple Sri Prahlad Prabhu. They were both guests of honor at our TKG Academy fundraiser. This event was wonderful. It first began with an amazing play by the youth of the gurukula. This play, His Holiness Bhaktimarga Swami is called "The Witness", it is the story of Lord Sakshi Gopal who is portrayed very nicely by Sakshi Gopal Das

This was followed by a great mrdanga presentation by Virabhadra, Sri Rupa, Haridas, and Kapil. This is the first time that had ever even done such a presentation.

Then His Holiness Indradyumna Swami spoke for about 15 minutes about the significance of gurukula, Krishna Conscious schooling which was then followed by amazing feast featuring foods from six different international festivals, Christmas, Kwanzaa, Hanuka, Diwali, Ramadan, and Chinese New Year.


This dinner was made more delightful by the wonderful kirtan led by Sri Prahlad Prabhu which is found on the on the top of the blog. Enjoy! Anandam buddhi vardanam!
Hare Krishna
Your humble servant,
Nityananda Chandra Das
ps. If anyone would like to see more videos or get DVD it can found here http://Rupa.com also to learn more about His Holiness Indradyumna Swami and his transcentental adventures please see http://www.traveling-preacher.com

ps.s see Benloka's new Valentine's video about "What is Love" an interview with His Holiness Jayadvaita Swami

Posted by Unknown at 1:10 PM No comments: 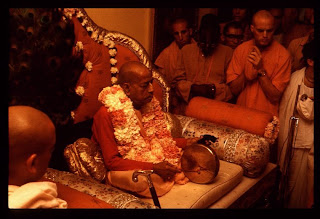 This is about my friend who happened to be the first big book distributor. In the picture of Srila Prabhupada-that is Buddhi with folded hands.
your servant,
Pandava vijaya dasa

The Day the First book Distributor Left-Feb 13
Although Srila Prabhupada wanted his disciples to be as eager to distribute Krsna consciousness literature as we was, no one of them knew how to do it. Distributing a magazine and asking for small donation was one thing-but a big hardbound book? When the entire shipment of "Teaching of Lord Caitanya" had arrived in New York in April of 1967. The devotees had hired a truck, picked up the books at the dock, and unloaded them at 26 Second Avenue. They had then shipped them to ISKCON centers in Los Angeles, San Francisco, Boston, Montreal, and elsewhere. And there they remained, in the temples. Some devotees had tried placing ads in magazines and leaving books in book stores on consignment. But the books didn't sell. How to sell these big, hardbound books remained a mystery-until something significant happened, an accidental discover. One day in 1971, while driving back to the temple after chanting in downtown San Francisco, two brahmacaris stopped at a local service station for gas. When the attendant came to the window for money, one of the devotees(Buddhimanta) showed him a "Krsna" book. the Attendant seemed interested, and the two devotees began preaching the glories of Krishna consciousness. When they suggested he take the book as payment for the gas, he agreed. Astonished at what happened and inspired at their success, the two brahmacaris went the next day with several "Krsna "books and stood in front of a grocery store. And again it happened: this time they sold two books. When Buddhimanta began selling as many as five books in a day the devotees in other temples especially Los Angeles, San Diego and Denver wanted to follow his example. And whoever tried and sold a book became caught up in a euphoric excitement. from Srila Prabhupada-lilamrta, volume 6, Uniting Two Worlds Srila Prabhupada sent Buddhimanta to different places where he showed the devotees how to distribute Srila Prabhupada's books. Buddhimanta had a habit of always calling all devotees Maharaja. Sometimes he is referred to as the inventor of book distribution . Something he never took credit for. ON February 13, 1990 he left his body in Vrindavin. All glories to Prabhupada's servant, Buddhimanta dasa. ********************************************************** More about Buddhimanta ******************* Buddhimanta had never met Srila Prabhupada and the Temple president of the San Franscisco, Kesava dasa. thought he should since he was the " biggest " book distributor at that time. They were all in Los Angeles and Buddhimanta had just come in from a day of distributing Srila Prabhupada's books. He had distributed about 100 small books at store right near the temple. When he returned from sankirtan Kesava said to Buddhi that Prabhupada wanted to see him ASAP. Buddhi ran to the Bhramachari ashram and took a shower put on a dhoti but could not find a clean kurta so wore nothing on top. He returned and they went up to Prabhupada's quarters. Buddhi the fast talking book distributor was in awe. He had distributed thousands of his books but never personally met Srila Prabhupada. Srila Prabhupada entered the room and Kesava and Buddhi both paid their obiesances. Srila Prabhupada sat down and said to Buddhi "so you distribute the most books?" Buddhi was in such awe he could not speak, so Kesava spoke for him and said"yes Srila Prabhupada, he is the biggest distributor." "How many books did you distribute today" asked Srila Prabhupada. Buddhi still could not speak and Kesava replied " about 100." "do you trick the people or tell them the truth to sell them a book" questioned Srila Prabhupada. Buddhi still was speechless and Kesava replied, "he tricks them . he tells them it is for a yoga society." " that is ok " Srila Prabhupada answered. "How come you are not wearing a shirt" questioned Srila Prabhupada looking at the bear chested Buddhi manta. "you work very had and should stay covered to not catch a cold." finally Buddhi could speak and relied, "I had just come back from book distribution and Kesava said we were going to see you I took a shower and my kurtas were dirty, so I came bare chested rather that wear a dirty shirt." Srila Prabhupada turned to his servant and said "go to my closet and get a clean kurta for Buddhimanta." the servant appeared with a clean kurta and gave it to Srila Prabhupada. Srila Prabhupada handed the kurta to Buddhimanta and said "put this on and stay warm." Buddhi manta was about six feet two inches and much larger than Srila Prabhupada but slipped into the kurta and thanked Srila Prabhupada. Srila Prabhupada thanked Buddhimanta for his book distribution and told him to teach other devotees how to distribute his books. Buddhi and Kesava thanked Srail Prabhupada , paid their obiesances and left the room. Buddhi was visiting Hawaii teaching book distribution and kept that kurta with his other clothes. One day a devotee that he had sold book in the Los Angeles airport, was having difficulties and was thinking of leaving. Buddhi gave him Srila Prabhupada's kurta with the promise he would not leave. He did not and at the present time does huge service distributing Krishna consciouness news in a newspaper under the guidance of Mukunda Goswami. The other evening a sanayssi was speaking about how he had purchased this Krishna Book from Buddhimanta. The sanyassi said his wife was angry for three days because he purchased the Krishna book. All glories to Srila Prabhupada and his first book distributor, Buddhimanta. all glories to the book distributors,Pandava vijaya dasa
Posted by Pandava at 7:49 PM No comments: