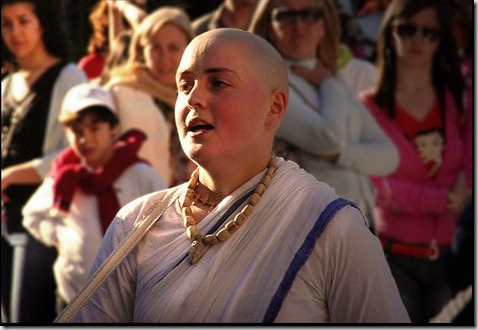 A few weeks ago I posted an article about Tilaka.  In this article Srila Prabhupada was quoted saying,


“I have no objection if members of the Society dress like nice American gentlemen; but in all circumstances a devotee cannot avoid tilaka, flag on head (shikha) and (tulasi) beads on the neck. These are the essential features of a Vaisnava." (SPL to Brahmananda, 14th October, 1967)

Tulsi Kanthi in on this list so I thought that I should also share some info about the kanthi, neckbeads as well.
The Krishna conscious culture teaches that anyone who is an aspiring devotee of Krishna should wear Tulasi neckbeads for Tulasi is so spiritually potent.   The following are some verses from the Hari Bhakti Vilasa

Srila Prabhupada also states,
In the Padma Purāna there is a statement describing how a Vaisnava should decorate his body with tilaka and beads: "Persons who put tulasī beads on the neck, who mark twelve places of their bodies as Visnu temples with Visnu's symbolic representations [the four items held in the four hands of Lord Visnu—conch, mace, disc and lotus], and who have visnu-tilaka on their foreheads, are to be understood as the devotees of Lord Visnu in this world. Their presence makes the world purified, and anywhere they remain, they make that place as good as Vaikuntha."

In response to a list of several question asked by disciple Vidya dasi, Srila Prabhupada replies


“1) Tulasi is one devotee who appears wherever there is devotion to Krsna. 2) Tulasis body is spiritual. 3) Yes, jewelry is all right. 4) If possible. 5) Tulasi leaves should be offered to the Deity.


"Just as a pet dog has got a collar, similarly we are pet dogs of God. So we have got this collar. And Yamaraja, the Lord of Death will understand that he-the devotee-is God's dog; he should not be shot down."

Because Tulasi kanthi is so important they are never taken off, but they can be replaced.  Anyone who wears Tulasi neckbeads at the time of death is greatly benefited beyond imagination, therefore it is important to keep them on at all times.   Tulasi also identifies one as a follower of Lord Chaitanya.
Srila Bhaktivinoda Thakura sings in his Svīkara: Acceptance of Activities Favorable to Pure Devotion - Song 2 Verse 3
gaura-bhakata-priya-veśa dadhānā
tilaka-tulasī-mālā-śobhamānā
3) I will put on the garb that is dear to the devotees of Lord Gaura-sundara, including the twelve Vaisnava tilaka markings on my body and beautiful beads of tulasī wood around my neck. 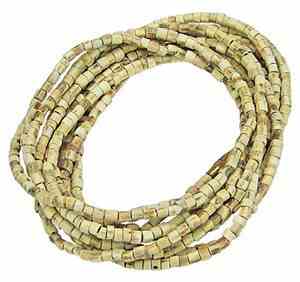 Srila Bhaktivinoda Thakur also writes in his Jaiva Dharma that of the 64 angas of devotional service the remaining fourty-four are observed to increase one’s bhakti.  Item number one is decoration of the body with the Vaisnava signs of tilaka and tulasī beads.
Q. One may ask that if we are not the body then what is the need of instructions of decoration of the body?
A. Yes we are not the body but unless were are Paramahamsa pure devotees then we are still conditioned by the body.  We don’t want to become falsely transcendental and reject those good things that the greatly intelligent pure devotees has suggested for our spiritual welfare.   Yes, if we are not the body then we also do not need to eat, but because this body is Krishna’s property we take care of it and because this body is Krishna’s property we decorate it in the suggested fashion.  Hare Krishna Posted by Unknown at 2:56 PM No comments:

TEXAS FAITH 44: What responsibility should Murdoch or any CEO take for their company?


That has been one of the top questions swirling around the breathtaking scandal unfolding in Murdoch's media empire in Great Britain. He has apologized for the phone hacking that some of his employees engaged in or knew about. But Murdoch made clear to Parliament last week that he was going nowhere.
That decision upset some critics, who thought he should step down. No doubt some want Murdoch to go because they don't like his journalism, including at Fox News. But others thought it was his responsibility to take the fall.
But is it?


Murdoch contends he didn't know everything everyone below him was doing, which seems plausible. In fact, how does the head of any major company, institution or government agency know what is happening several rungs down? We in the media are often quick to want heads to roll. But why should folks at the top take a fall, if they were not directly involved?


So, here's the discussion for this week:
What does your training as theologians, ethicists, clergy, academics and people of faith teach you about situations like this? Specifically, what responsibility should the leader of an organization take for his or her institution?

NITYANANDA CHANDRA DAS, minister of ISKCON (International Society for Krishna Consciousness), Dallas
The Vedic tradition teaches that if your children are employed and married you should then immediately retire and live a simple life dedicated to increasing your loving attachment and consciousness of Krishna, God.
To see all the responses from the Texas Faith Panel click here

why worship a false god who is a demon in servant hood to Satan, the arch enemy of the one true Living God who gave up His son Jesus, who died for the sins of the world, in order to reconcile mankind to God.

Please read before viewing the picture – it’s worth it. A picture began circulating in November. It should be ‘The Picture of the Year,’ or perhaps, ‘Picture of the Decade.’ . The picture is that of a 21-week-old Unborn baby named Samuel Alexander Armas, who is being operated on by surgeon named Joseph Bruner.

The baby was diagnosed with spina bifida and would Not survive if removed from his mother’s womb.

…
She knew of Dr Bruner’s remarkable surgical procedure. Practicing at Vanderbilt Univ Med Ctr in Nashville , he performs these special operations while the baby is still in the womb.

During the procedure, the doctor removes the uterus via C-section and makes a small incision to operate on the baby. As Dr Bruner completed the surgery on Samuel, the little guy reached his tiny, but fully developed hand through the incision and firmly grasped the surgeon’s finger.

Dr Bruner was reported as saying that when his finger was grasped, it was the most emotional moment of his life, and that for an instant during the procedure he was just frozen, totally immobile.

The photograph captures this amazing event with perfect clarity The editors titled the picture, ‘Hand of Hope.’ The text explaining the picture begins, ‘The tiny hand of 21-week-old fetus Samuel Alexander Armas emerges from the mother’s uterus to grasp the finger of Dr Joseph Bruner as if thanking the doctor for the gift of life.’

Little Samuel’s mother said they ‘wept for days’ when they saw the picture. She said, ‘The photo reminds us pregnancy isn’t about disability or an illness, it’s about a little person.’Samuel was born in perfect health, the operation 100 percent successful.

One Response to “The baby grabs the surgeons fingers”

Posted by Unknown at 2:22 PM No comments:

Vaishnava Tilak–Marking your body as the temple of God

In the Vaishnava tradition devotees wear the urdhva pundra made of gopi chandan commonly known as tilak.

By wearing tilak not only does one identify ones body as the temple of the Lord but also one is blessed by the auspicious protection of the Lord.  Not only is the wearer immensely benefited but even those who see the tilak marks are benefited.

“In Kali-yuga one can hardly acquire gold or jeweled ornaments, but the twelve tilaka marks on the body are sufficient as auspicious decorations to purify the body. “  SB 4.12.28 Purport

Srila Prabhupada emphasized that tilak was part of the essential dress of a devotee.

“I have no objection if members of the Society dress like nice American gentlemen; but in all circumstances a devotee cannot avoid tilaka, flag on head (shikha) and (tulasi) beads on the neck. These are the essential features of a Vaisnava." (SPL to Brahmananda, 14th October, 1967)

Tilak is applied with the Lord’s holy names thus giving protection to the whole body.

“While decorating the body with tilaka, we give protection to the body by chanting twelve names of Vishnu. Although Govinda, or Lord Vishnu, is one, He has different names and forms with which to act differently.” SB 10.6.27-29 Purport ACBSP

"Persons who are decorated with tilaka or gopī-candana [a kind of clay resembling fuller's earth which is produced in certain quarters of Vrindāvana], and who mark their bodies all over with the holy names of the Lord, and on whose necks and breasts there are tulasī beads, are never approached by the Yamadūtas." The Yamadūtas are the constables of King Yama (the lord of death),  - Nectar Of Devotion Ch. 9

Srila Prabhupada has given the example of a policeman.  He can be identified by his dress.  Downing the dress, the policeman is also reminded that his behavior should honor his position.

Simply by seeing someone wearing tilak, people are induce to utter the words, “There is a Hare Krishna” and thus they immensely benefit thus we should not see it as something external.

“Just like sometimes on the street some outsider, seeing you, they chant Hare Krsna only by the symbolic, sānketya. Because they see: "They have got tilaka, kunti." Therefore these things are required. Don't become immediately paramahamsa—no tilaka, no kunti and no bead bag. This is not good. Sānketya. So that others may understand, "Here is a Vaisnava. Here is a Krsna devotee..." And if he is simple, he'll chant, "Hare Krsna." This chance should be given. Therefore it is necessary, how people can utter. That chanting may save him from the greatest danger. Therefore it is said, sānketyam pārihāsyam. If somebody jokes... Sometimes they do that. "Hare Krsna" means he is not seriously chanting, but he is trying to joke the other party who is engaged in chanting. And that is also good, pārihāsya.”  - Śrīmad-Bhāgavatam 6.2.13 -- Vṛndāvana, September 15, 1975

Here is a quick video tutorial of how to put on tilak. 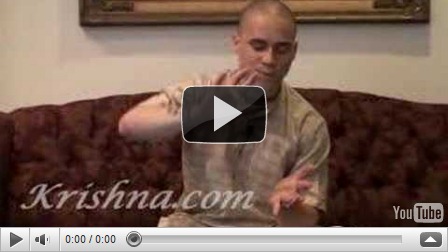